As I write this my stomach is in knots. These knots are not the result of me being sick or that I have consumed too much beer but that in the last two weeks I have learned that two of my local craft breweries are shutting their doors forever. It is a crushing blow to them but also to my local craft beer world.  It is why it is important to drink local beer.

And while I am sad to see Slate Creek Brewing from Coeur D’ Alene Idaho and Downdraft Brewing from Post Falls Idaho blow their final kegs, I will continue to support my local craft scene as much as I can by continuing to drink local beers and leave empty pint glasses all over North Idaho and beyond.

The loss of these two breweries also brings up an important topic, sustainable travel. Many travel bloggers have been addressing the importance of sustainable travel this year, even bubbling up all the way to the United Nations addressing it. We as travelers have a duty to give back to the areas we are visiting by helping fuel the local economies we visit. When it comes to beer, think about visiting the local brewery and purchase pints from them instead of giving money to the behemoth giants such as In-Bev (Budweiser), SABMiller, and Heineken.

In addition to the sustainable travel initiative I know I am not alone in the quest to keep the craft beer world small. Lately, the beer giants have been scooping up successful craft breweries. It is upsetting to many, myself included.

“Craft” isn’t just a word that we slap in front of beer to make it sound interesting. It is referring to the brewers having an intimate knowledge of the product he or she is making. Craft allows for these talented brewers to continue experimenting with hop combinations and brewing techniques while not being bogged down with expectations laid out by board members who are more likely to be business minded than beer minded. 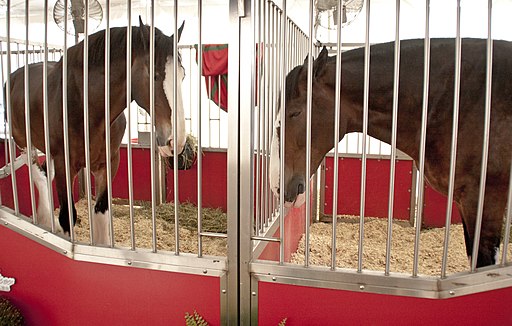 The Budweiser Clydesdales.  I’d look sad too if I was associated with Budweiser.

And let’s be honest if those board members knew anything about making good tasting beer the silver bullet train would be parked indefinitely, the crescent moon lady would finally put down her beer and the Clydesdales would be put out to pasture.

There has been a lot of buzz on the Internet ever since 2011 when In-Bev bought their first craft brewery, Goose Island out of Chicago Illinois. Others have toppled since, with probably the most disappointing for me, Elysian Brewing from Seattle Washington. Elysian’s beer line up is filled with bold beers but the transaction over to In-Bev was quite ironic when we think about Elysian’s Loser Beer. The tagline for the beer is “corporate beer still sucks”. Hey, Elysian said it, not me! But it is a statement I can get behind.

And it appears to no longer be just chatter that people are upset about the Big 3 Breweries gobbling up the little guys as there is now a crowdfunding movement “Take Craft Back” that has been making headlines. Take Craft Back’s intention is to raise enough money to buy In-Bev, thus taking apart their, literal, world dominance over the beer industry.

Take Craft Back does have a huge hurdle to overcome as In-Bev is supposedly worth $213 billion dollars USD. It is not a small chunk of change and from my research, I do not see that In-Bev is even for sale. So even if the money is raised it may take quite the negotiator to broker that deal. And don’t get me wrong, while they may have a hurdle to get over, they have already raised an impressive 3 million dollars as of the end of October 2017.

Even if Take Craft Back does not reach their $213 billion dollar goal, the fact that they have raised millions of dollars already is a pretty clear sign to me that people are over big corporations owning and dictating what beer we can have and where. More and more consumers want to support the small businesses in our local communities as well as small businesses when we travel. And there is no better way, in my opinion, then raising a pint at a local brewery.

UPDATE 3/8/2018:  Both breweries mentioned in this post have since reopened under new ownership.  We say congratulations to both breweries and wish them both success.  And of course, we will be stopping by for a pint!

2 replies on “Why It Is Important To Drink Local Beer”

If they had been making cider instead of beer maybe they would not have had to close down. Cider is the fastest growing segment of the beverage industry.

until the bust of the cider industry 🙂